The City Dark: "What does it mean to lose the night?" 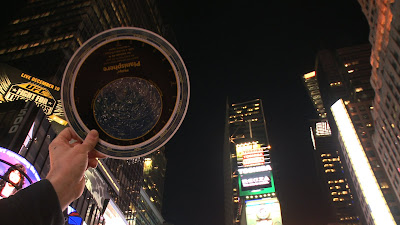 If you live in a city or a suburb, chances are you don’t see many stars, even on a clear night. No matter where you live, you almost certainly see fewer stars now than you would have 25 or 50 years ago.

What do we lose when we lose the night? Filmmaker Ian Cheney, co-creator of the award-winning documentary King Corn, asked himself that question after moving from rural Maine to Brooklyn, New York and realizing that he could no longer see more than a handful of stars in the night sky. An inability to observe stars and planets at night caused by human sources of illumination is one definition of light pollution.

No surprise, Cheney’s journey to answer his question takes the form of another documentary. The City Dark considers the short history of artificial light (“We've evolved, all life on the planet for 3 billion years, with a reliable daily cycle of 12 hours of bright, broad-spectrum light and 12 hours of dark,” says one of the film’s experts. “It's only been the last 120 years where masses of people have had their dark period dramatically eroded by the use of electric light.”); the effects of light pollution on birds, sea turtles, and night-shift workers; and how the benefits of light at night can be maintained without creating light pollution.

When Virgil and I sat down to watch the 58-minute classroom version (there’s also an 83-minute version), I didn’t know how long the documentary would hold the attention of a fidgety fourth-grader. But he was immediately drawn into Cheney’s quest. He was shocked that astronomy students on Staten Island were able to see only the very brightest stars and planets in New York City’s light-polluted skies. He asked me to stop the film after a segment that showed baby sea turtles traveling toward lighted parking lots and strip malls — and death — and away from the ocean. A biologist had explained that sea turtles had evolved over many millions of years to seek out the ocean by its ability to reflect back the night sky. “I don’t like that,” Virgil said, burrowing his face in my side.

But he wanted to keep watching. When the film was done, he hugged me for a long moment. “I’m glad we have a night sky,” he said. 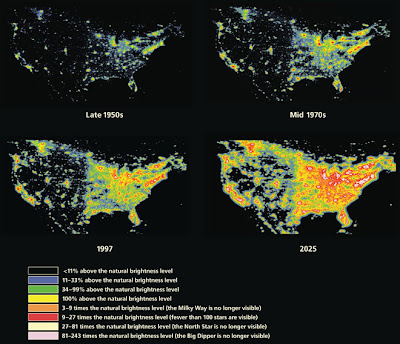 Later, I found a map that showed the spread of light pollution over much of the United States over the past 50 years. I’d like to think that I can locate our small dark-sky spot in central New Hampshire on the most recent map. After seeing The City Dark, I feel lucky to step outside our door any clear night and see thousands of stars — and newly aware of what’s lost on the other side of a big city’s bright lights.

An organization called GLOBE at Night has been creating global light-pollution maps since 2005 by enlisting citizen-scientists to make nighttime observations. The final dates in this year’s effort are April 11-20. The organization is hoping for 15,000 observations; just under 10,000 were made in first three months of 2012.

- … about The City Dark. The film is being shown at Quinnipiac University in Hamden Connecticut, on April 2; at the Catamount Arts Center in St. Johnsbury, Vermont, on April 12; and at the Philadelphia Science Festival April 20-29.

- … about the 2012 GLOBE at Night effort. The website includes downloadable teacher and family activity packets.