Make your own summer camp 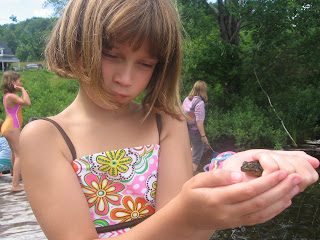 If you fly Southwest Airlines this month, take a look at the in-flight magazine in your seat-back. The photo on the cover is of our pond, and the story inside is about a two-week theater camp that we’ve run out of our house the past three summers. I didn’t write the article — Jim did — but as he worked on it, we both realized that we’d discovered (or rediscovered, more like) a working parents’ guide to creating your own summer camp.

We live on a property that happened to be run as a summer camp for most of the twentieth century, but we weren’t interested in continuing that history when we bought it. Then we had children, and work to get done, and what started out as an idea for shared babysitting unexpectedly turned into a lakeside theater camp.

Here’s the funny thing we learned, though, as Jim wrote: “The lake isn’t important and the theater isn’t important.” What was important was that we found two teenagers — Ian and Eben — who loved theater and loved teaching it to kids. They could have taught art or music, or simply organized summer activities, and the kids would have loved it, because Ian and Eben made it fun. It didn't hurt, either, that the last hour of every day was good old-fashioned running around outside fun.

This year our theater camp will run at full capacity, 16 kids each week. That’s all our house and Ian and Eben can handle. Thankfully, the kids spend the last hour of each day running around outside. Last year, when the number of parents and relatives coming to watch the Friday performances outgrew our barn, we moved the shows to the town hall.

Other camp start-up guides might begin with instructions to hire an attorney, develop a business plan, and form a board of directors. We did none of that — and found that starting our own summer camp wasn’t all that hard. In just a few years, the camp has become its own small community, and part of a larger one, as well. 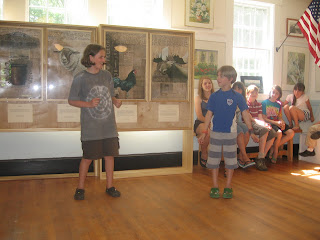 Here are some things we learned along the way:

- Find a teenager. More specifically, find a teen or young adult who’s great with kids and who has a talent to share. That could be a babysitter, a nanny, or an older child. (You or another parent might also take on this role, but we suspect that kids like our camp precisely because it isn’t run by adults.) You can also find talented young actors, artists, and musicians through local schools or community arts groups.

- Have a grown-up off-stage. Ian and Eben, our theater-camp guys, are both responsible, but we felt more comfortable also having at least one adult present at all times. We think other families were more willing to send their children to our camp because, as writers who work at home, we were often there. Other parents helped when we couldn’t be present.

- Start small. We had six kids the first year — our two, plus Ian’s younger brother, his niece, and two neighbors. We asked families to pay $20 a day. That first camp was successful, but if it hadn’t been, no one would have been out much money or effort.

- It's not a business. In terms of our overall organization, what we’re doing may not even rise to the level of a babysitting coop. All the money that comes in goes to pay Ian and Eben, minus what we spend on food. We already know the families that join us, so we share a high degree of trust. Early on, we didn’t even think about things like liability insurance, though you may want to.

- Ask for help. We started the camp with the idea that it would free up time for us to work. It took us a couple of years to admit that we weren’t getting enough done and to start asking other parents to help us out. We encourage you to ask others to pitch in from the beginning, whether it’s to shop for food or to move furniture back into place when camp is over.

- Look at the big picture. We’ve definitely complicated our lives by running a theater camp. But our children have been able to spend part of their summers “at home,” which they like, and to share the experience with friends, which they really like. We’ve been able to help two talented young men gain work experience, and some money, to boot. And we’ve had the pleasure of building something special together with other families.