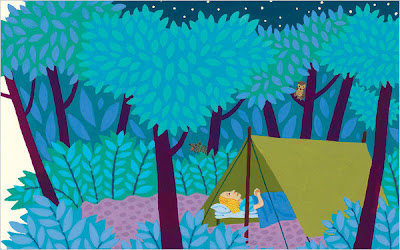 Ursula reminded me of this recently when we were talking about work she’d like to do when she’s older. Now that she’s almost a teenager, that list has expanded. But it continues to include jobs in the outdoors and field work — like the work of her first role model.

So when I saw a review of two children’s books about Jane Goodall in Sunday’s New York Times Book Review, I stopped to read. The picture books — Me … Jane, by Patrick McDonnell, the creator of the comic strip “Mutts”; and The Watcher, by Jeanette Winter — help young children learn how someone grows up to be Jane Goodall.

Both books follow the standard life of the young naturalist. Young Jane spent her childhood largely outdoors and in the company of animals both domestic (horses, chickens, dogs) and wild (turtles, even earthworms). She was, as the title of Winter’s book makes clear, a patient observer of her world. A telling incident that appears in both books has five-year-old Jane sitting for hours in a chicken coop, determined to understand exactly how eggs come from chickens.

Goodall was also strongly influenced by several books: The Story of Dr. Doolittle by Hugh Lofting, which delighted her with its descriptions of a man who talked to the animals; and Tarzan of the Apes by Edgar Rice Burroughs, which offered a vision of an African paradise, and a man who learned to live among the wild apes. Goodall gave Tarzan’s given name, Greystoke, to the first chimpanzee who befriended her in the early years of her research at what became the Gombe Stream National Park.

It’s possible that the new books will serve similar purposes for young girls and boys who are drawn to the natural world. The pictures will be appreciated by very young children, the stories and larger themes by readers in the elementary grades. I won’t be surprised if Ursula enjoys these books, too. I think she’ll feel a kinship with the young girl who grew up to become Jane Goodall — and perhaps will gain new understanding about her own dreams.

- Read reviews of Me…Jane and The Watcher in The New York Times Book Review.

- Watch a video interview with Jane Goodall about the new children’s books.