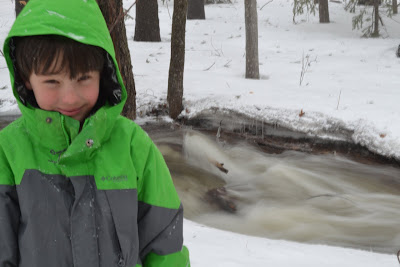 School here was canceled yet again on Monday – not because of snow, but because of rain and sleet that built up ice on power lines, parked cars, and roadways. You can tell that winter has gone on long enough when yet another snow day is met with groans instead of grins. One reason: The kids had to pull out their “snow day” homework packets. “If I have to do homework,” Virgil whined, “at least I should get recess, too!”

It’s hard to make a snow day a play day, even without homework, when you’ve been looking out the window at freezing rain and sleet for two days. The “wintry mix” of weather, especially for parents of house-bound children, can make this season start to feel like a slog.

That mix of rain and snow, ice and slush, is a sign — early, to be sure — of a season in transition. The power of nature seems heightened. We don’t think of that glaze of ice outside our windows, for instance, as being heavy. But the coating added so much weight to the white pine in our back yard that, at some point during the night, it snapped off a couple of big limbs.

The power of frozen water and warming temperatures shows up in other dramatic ways at this time of year. The sleet and rain from the recent storm have swollen streams and created torrents of meltwater; dirt roads have badly gullied, the culverts overwhelmed and overflowing. On Monday, the ice-jam-filled Connecticut River overflowed its banks in Bradford and reached flood stage in Lebanon. A flood warning covered all of New Hampshire. 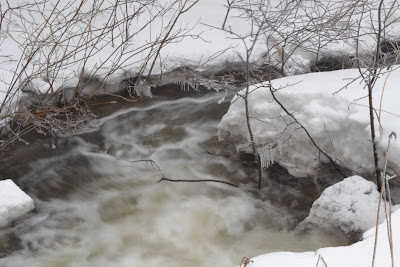 All this reminded me of a video clip I came across recently. At Yosemite National Park, the changing season is marked by a powerful phenomenon called “frazil ice.” Thick ice crystals form in the turbulent, super-cooled water coming off the high Yosemite waterfalls. At the bases of the falls, enormous piles of the frozen slush build up and slough off into the melting streams, filling them bank-to-bank with a heavy, moving slurry. Not quite water, not quite ice, the slurry slides along the current like thick, heavy cement. (Frazil ice also forms in other places, including some areas along the Hudson River.) The transformative power of that run-off is — well, you should see it for yourself.

Seeing the annual phenomenon in Yosemite was enough, for at least a while, to make this frazzled parent think of the season in a different way.

- Learn more about frazil ice in Yosemite National Park and along the Hudson River in the Adirondacks.

- View the video of frazil, or frazzle, ice in Yosemite National Park, below.

Photos: Ice and fast water — but no frazil ice.