The right trail, and candy, get a reluctant first-grader hiking 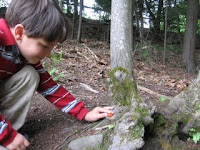 My husband and I have come up with private nicknames for our children when we hike. We’ve dubbed our ten-year-old daughter “nature girl.” She seems to have been born to hike. Not so our six-year-old son, Virgil. When he is forced to walk uphill on a narrow path, he can instantly transform himself from boy to puddle. Such moments have earned Virgil the name “floppy boy.”


“Floppy boy” does not want to hike. But hiking is one of the things we do together as a family. So the question arises: How to make hiking a positive experience for a floppy child? Or how to cover a few miles, at least, with a reluctant hiker?

We’ve developed a few answers to those questions. You could call them a small bag of tricks. The point of each trick is to make the hike an experience for Virgil that doesn’t result in tears, meltdowns, and limbs gone liquid.

Here’s a technique from our most recent hike. We call it the Hansel and Gretel ploy.

We’d been on the trail five minutes, maybe less, when Virgil’s shoulders started to droop and his feet started to shuffle — sure signs that his limbs were about to go into liquid, “floppy boy,” form. I grabbed a package of M&Ms from my pack. “Hide these,” I told our daughter, Ursula, and her friend Ben, handing them the bag. They ran ahead on the trail. I looked down at Virgil. Sure enough: his bones were solid again.

The hike became a moving game of Find the M&M. Every 20 paces or so, Ursula and Ben found a place for one of the candies — a mossy bed, a bent tree root, a “fairy house” under a tree trunk, rocky crevices, flat stones — and called directions back to Virgil: “Yellow one on a log!” “Green one off the trail to the right!” We made noisy progress, but by god, we made progress!

Returning to the car at the end of the day, after a round of playing pirate ships with leaves and logs in a small stream, I added a twist to the Hansel and Gretel gambit. When Virgil started whining again, I pulled out another bag of M&Ms. “Virgil,” I whispered, tearing open the bag, “Let’s beat those pirates down to the car. We’ll slow them down by making them look for treasure.” Virgil placed his pirate booty practically on the run, beat his sister and her friend to the car, and ended his day of hiking with a smile. Floppy boy made no appearance on that hike!


LEARN MORE
Two articles from AMC Outdoors give more tips on encouraging even the most reluctant young hikers: